The Story of Joseph

The story of Joseph is a prophecy that prefigures the life, death and resurrection of Jesus Christ. For that reason it is important reading for all parents and children. 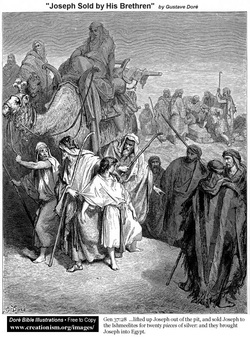 The story begins when Jacob was getting on in years, at which time he had a son whom he named Joseph. Joseph was disliked by his brothers because their father favoured him before them all. They were jealous of him and didn’t have a good word for him. Their father doted on Joseph and made him a coat of many colours, a very fine coat. This made his brothers hate him more and more. Not only that but Joseph had a dream and in this dream he and his brothers were binding sheaves in the field when Joseph’s sheaf stood up and all his brother’s sheaves bowed down to his. He told this dream to his brothers. They were indignant. ‘What? Are you going to rule over us?’ they said. Then Joseph had another dream even more outrageous than the first. ‘In my dream,’ he told his brothers, ‘the sun, moon and eleven stars bowed down to me.’ Even his father, when he heard the dream, said, ‘What kind of dream is this that you have had? Shall we indeed come, I and your mother and your brothers, and bow to the ground before you?’ {Genesis 37:10} Israel pondered these dreams for he wondered if they were given to Joseph by God and foretelling what was to happen.

JOSEPH’S BROTHERS PLOT TO KILL HIM

Israel kept Joseph at home with him but when Joseph reached the age of seventeen, one day he sent him to see how his brothers were getting on in the pastures, for they were shepherds. When his brothers saw him coming they said, ‘Here comes this dreamer! Come now let us kill him.’ {Genesis 37:19-20} That was how much they hated their brother. So they overpowered him and threw him into a deep pit without any water or food and left him there to die. Then they sat down to eat.

‘Look,’ Judah said, ‘Here comes a caravan. Let’s not kill Joseph for he is our brother but instead sell him to these caravan people.’ They all agreed and as the caravan passed by they pulled Joseph out of the pit and sold him for twenty pieces of silver. They then took Joseph’s coat and dipped it in the blood of an animal and showed it to their father. Israel was greatly distressed and would not be comforted. ‘I will go down to the Sheol to my son in mourning,’ he said.

JOSEPH SOLD AS A SLAVE TO POTIPHAR

An officer of Pharaoh, the king, bought Joseph from the caravan traders and made him a servant in his house. Everything that Joseph did was good. He pleased Potiphar. Potiphar saw that the Lord was with him, {Genesis 39:2} and that whatever he did prospered. He found Joseph to be honest, intelligent and skilful. What good fortune it was that he had purchased him from the traders. He was not an Egyptian slave but apparently came from a nomadic tribe of shepherds. Good slaves were hard to come by. Joseph pleased Potiphar so much that he made him head of his household and left everything for him to manage.