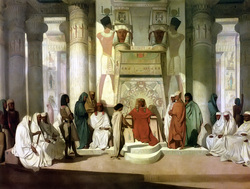 Pharaoh’s cup bearer forgot all about Joseph. He did not mention him to Pharaoh. But one day, after two whole years had passed by, Pharaoh had two dreams and he was greatly troubled by them. The dreams had all the marks of a God given message. He called his wise men and magicians to hear his dreams and interpret them.
‘I had two dreams,’ he said. ‘In my first dream I was standing by the river Nile and there came up out of the Nile seven sleek and fat cows, and they grazed in the reed grass. Then seven other cows, ugly and thin, came up out of the Nile after them, and stood by the other cows on the bank of the Nile. The ugly and thin cows ate up the seven sleek and fat cows.’ (Genesis 41:1-5)
‘Then I awoke,’ he said. ‘But I fell asleep again and dreamed a second time. Seven ears of grain, plump and good, were growing on one stalk. Then seven ears of corn, thin and blighted by the east wind, sprouted after them. The thin ears swallowed up the seven plump and full ears. Then I awoke. (Genesis 41:5-8)
The wise men and the magicians did obeisance to Pharaoh. They were the cleverest men in the kingdom but they could not fathom out the meaning of the dreams. The dreams were so alike yet what had cows and ears of corn in common? It was a mystery. Pharaoh was very disappointed and troubled. Was there anyone who could interpret the dreams for him? It was then that the cup bearer remembered Joseph. So he told Pharaoh about Joseph in prison.
‘When the chief baker and I told Joseph our dreams he was able to interpret them for us and so they turned out. I was restored to my position and the chief baker was hanged. ‘
Pharaoh immediately sent for Joseph. Joseph was astonished when he was told to have a bath and shave himself and put on a suit of clothes fit to meet Pharaoh in. Then his hands and feet freed from chains, he was taken to the palace to meet Pharaoh. Joseph before PharaohGood corn in Pharaoh's dreamCows in the Nile
Pharaoh said to Joseph, I have had two dreams and there is no one who can interpret them. I have heard that when you hear a dream you can interpret it.’
Joseph answered, ‘It is not I who interpret dreams but God; God will give Pharaoh a favourable answer.’
Then Pharaoh told Joseph his dreams.
‘Pharaoh’s dreams are one,’ Joseph replied. ‘God has revealed to Pharaoh what he is about to do. The seven good cows are seven years; and the seven good ears are seven years; the dreams are one. The seven lean and ugly cows that came up after them are seven years as are the seven empty ears blighted by the east wind. They are seven years of famine. It is as I have told Pharaoh. God has shown Pharaoh what he is about to do. There will come seven years of great plenty throughout all the land of Egypt. After them there will arise seven years of famine and all the plenty will be forgotten in the land of Egypt; the famine will consume the land. The plenty will no longer be known in the land because of the famine that will follow it, for it will be very grievous. And the doubling of Pharaoh’s dream means that the thing is fixed by God. Now therefore, let Pharaoh proceed to appoint seven overseers over the land, and take one fifth of the produce of the land of Egypt during the seven plenteous years. Let them gather all the food of those good years and lay up grain in the cities and let them keep it. That food shall be a reserve for the land against the seven years of famine, so that the land of Egypt may not perish through the famine. (Genesis 41:25-35)

1. What will happen next? Will Joseph be released from prison?

2. Will he be rewarded for interpreting the dreams?
3. Why was Joseph able to interpret Pharaoh’s dreams?