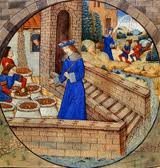 The story so far recounts how Joseph was made the governor of Egypt. In the seven years of plenty predicted by Pharaoh’s dream and interpreted by Joseph, Joseph collected grain in huge stockpiles so much that he stopped counting it. During that time two sons were born to him and he was happy and blessed in the land of his captivity and suffering.
At the end of the years of plenty a severe famine gripped the land of Egypt and the land of Canaan where Joseph’s family lived, his father and his brothers. People came from far and wide to buy grain in Egypt. People everywhere were hungry and starving. Joseph’s brothers also came from the land of Canaan to buy grain in Egypt
Their father, Israel, was fearful for the youngest, named Benjamin and so he kept him at home.  (Genesis 42:4) The brothers of Joseph arrive in Egypt and came before the governor, Joseph to buy grain. Joseph recognised them immediately but they did not recognise him. How could they? He was much older, not a boy anymore and wore Egyptian robes. Joseph questioned them and treated them harshly.
‘Who are you and where do you come from? he demanded. ‘You are spies!’
‘No, my Lord, your servants are all the sons of one man. Your servants are honest men, not spies.’ (Genesis 42:10) Joseph pretended not to believe them. He remembered his dreams about them, how they had scorned and ridiculed him. Now the dreams had come true. They were before him calling themselves his servants.
‘No!’ Joseph insisted, ‘you have come to see where our land is unprotected.’
‘Oh no! Oh no! Yours servants are twelve brothers, the son of one man who lives in the land of Canaan. The youngest is now with his father and one is no more.’ (Genesis 42:13)
Before him stood the very brothers who had sold him as a slave. These were the brothers who had refused to listen to his cries or mercy. They even wanted to kill him but instead sold him into slavery. What must Joseph have felt and pondered in his heart? These men deserved to die for their cruelty and sins. He was appalled by their Godless hearts. They were now in his power like he had been in theirs. Should he punish them? Should he have them executed? Joseph was the governor of the land of Egypt second only to Pharaoh. He only had to say the word and his brothers would be no more. But he withheld his anger and instead placed them on trial as spies. He said to them, ‘It is just as I told you: you are spies and this is how you will be tested: as surely as Pharaoh lives you will not leave this place unless your youngest brother comes here. Send one of your number to get your brother; the rest of you will be kept in prison...’ (Genesis 42: 14-16) He then put them all in prison for three days.
There were two death sentences hanging over them. If they did not bring back to Egypt their youngest brother, Benjamin, they would face the death penalty as spies. If they were not able to bring him back they would die in the land of Canaan of starvation. What will happen next?
Discuss Joseph's situation. What did Joseph want to hear from his brothers?
What did Joseph's brothers fear most?