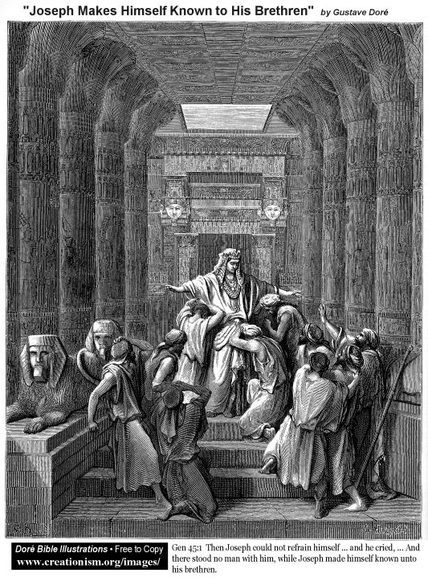 Joseph’s brothers set out for home. They had not gone far when Joseph’s steward and soldiers came after them and stopped them.
‘Why have you returned evil for good?’ questioned the steward. ‘You have stolen my masters silver cup!’
Joseph’s brothers were bewildered.
‘Why would we do that?’ they protested. ‘Far be it for your servants to do such a thing. Did we not return the money we found in our sacs?’
But the steward insisted that the silver cup his master used was in one of their sacs.
‘Then, if that is so, let the person in whose sac the cup is found die, and we will all become your slaves,’ they said.
‘Very well,’ replied the steward, ‘only the one in whose sac the silver cup is found will be my slave. The rest of you may go free.’
They lowered their sacs to the ground and the steward examined them beginning with the eldest and ending with the youngest brother, Benjamin. The silver cup was found in his bag. All of them were shaken and distressed. Their visit to Egypt had ended in disaster, the worst disaster imaginable. How could they return to their father without him?
They had no choice but to return to Joseph’s house and plead for mercy. Joseph received them angrily.
‘What is this that you have done? Do you not know that one such as I can practice divination?’
They all bowed down before him/
Judah said, ‘What can we say? How can we clear ourselves of this charge? God has found out the guilt of your servants. We will become your slaves.’
‘No, no that is not necessary,’ Joseph said. ‘Only the one in whose sac the silver cup was found will become my slave.’
Judah was greatly distressed and pleaded for Joseph to hear him speak.
‘My lord, you have asked about our father. He is an old man who loves the only child of his wife. His brother is dead. Our father’s life is bound up with the child. If we do not return with him our father will die in great sorrow. So, I beg you, let me be your slave instead of him and allow him to return to his father. I made myself surety for the boy.’
When Joseph heard this he was close to tears for he knew that Benjamin and his father was loved dearly and that his brothers were no longer evil men. He could not stop tears coming into his eyes. He ordered all the Egyptian servants to leave and he asked his brothers to come close for he had something private to tell them. They were nervous and apprehensive. What now? What was the lord of all Egypt going to speak to them about?
‘I am Joseph, your brother whom you sold into Egypt. But do not be distressed or angry with yourselves for it was God who sent me here to save life, for the famine is very great and will last for another five years. This was God’s doing. It was not you who sent me here but God.’
Joseph wept and embraced his brothers. They were dumfounded. God had used their evil for good. It is hard to imagine what took place that day when they were reunited with Joseph. Joseph wept so loud that all the Egyptian servants heard him and spread the news that Joseph’s brothers had come to Egypt. There was great excitement. Pharaoh soon learned the truth about his brothers and how Joseph had been sold as a slave by them but were forgiven, for God had saved them from starvation through Joseph and it was the God of Joseph that had saved them all from death.
Joseph told his brothers to return to the land of Canaan and bring his father and all his household back to Egypt and live.
‘Tell him I am not dead but alive.’
The brothers returned to tell their father the happy news but he could barely believe it. He was overjoyed and had so much joy in his heart he thought he must die right away. But after letting the news sink in and after listening to the stories they told he was convinced and returned to Egypt with them. There he lived out his days, saw Joseph and his two sons and was the happiest grandfather that ever lived.

Question 1.    Joseph forgave his brothers. Why did he forgive them?

Question 2.    Why did God allow Joseph’s brothers to sell him as a slave?

Question 3.    Why was Joseph imprisoned?

Question 4.    Pharaoh said there was no one in the land of Egypt as wise as Joseph because the Spirit of God was in him. Why do you think Joseph was so wise?

Question 5.    Read the story of Joseph in your bible and discover why God is wise and can overcome evil with good.